There are no alerts at this time.

By 1954, privately owned public transportation systems across the country were beginning to feel the pressure of competing with the automobile. As the number of cars and highways grew, attitudes toward mass transportation rapidly changed, especially in small urban areas such as Williamsport. Rising bus fares and reduced schedules added to the feeling that buses were no longer the most convenient mode of transportation.

In Williamsport, the bus company sought to improve profits without raising fares by cutting back on the least profitable service, that on Sundays and evenings. At the same time, Bush tried to extend service wherever or whenever it was requested. However, each expansion of service soon failed because of a lack of sustained ridership. Records show that in 1951 the Company lost $21,000, the first time a deficit was incurred under Bush’s control.

When the deficits continued, the owners decided to sell. On March 19, 1955, Alvin Bush and officials of the Edwards Motor Transit Company agreed to a purchase price of $33,000. The Edwards Company was a well established intercity transit service operating out of Williamsport as part of the Lakes-to-Sea system. Although a separate entity was formed to operate the local bus system, management planned to make Joint purchases of gasoline, tires, and maintenance and other services, in that way keeping expenses to a minimum. The president of the newly incorporated Williamsport Bus Company was William H. Edwards.

Service under the new ownership began on June 1, 1955. Within five months, the company felt it necessary to raise the fare from 10¢ to 13¢. This proved to be the first of many fare increases. In 1956, although ridership on the system reached nearly, 2.9 million, the revenue per mile was only seven-tenths of a cent above the cost per mile. Then, over the next three years, ridership dropped by 40% to 1.6million in 1959. In 1957 there was another fare increase this one to 15¢.

G M C bus on west fourth street in nineteen sixty nine
In Montoursville, the Lycoming Auto Transit Company, which had been providing bus service since 1924, was also losing out to the private automobile. On June 1, 1960, the Williamsport Bus Company purchased the Montoursville line. Although ridership initially increased with the inclusion of this new service, the increase lasted for only two years. 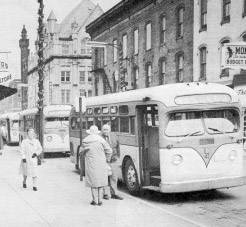 Several GMC buses on West Fourth Street in December 1969. They are typical of the buses used in Williamsport during the 1950’s and 1960’s.

Meanwhile, the general exodus to the suburbs continued, suburban shopping malls began to appear, and because gasoline prices were so low, people were not reluctant to use their cars. To offset decreasing ridership, the bus company had to raise fares and cut services in order to remain financially viable.

Unfortunately, these moves only led to further ridership declines. By 1965, ridership on the Williamsport Bus Company bus system had dropped 56% in ten years from 2.9 million in 1956 to 1.26 million in 1965.