There are no alerts at this time.

The End of an Era

The End of an Era

There were few extensions of trolley service after the late 1890’s, the only major one being the Cemetery Line which opened for service May 10, 1908 and which ran from the intersection of Park and Campbell to the Wildwood Cemetery gate. The rolling stock was continually upgraded though, and in general, the system was well run and maintained. Beginning around the time of World War 1, continually rising costs and increasing competition from jitney buses and automobiles began to cut heavily into the profits of streetcar companies everywhere. The owners of the Lycoming Improvement Company were therefore happy to sell their interests in 1923 to the Lehigh Power Securities Corporation, a holding company of the Pennsylvania Power and Light Company.

One year later, motor buses made their first appearance as part of the Williamsport system when a bus line to Duboistown was established in 1925. 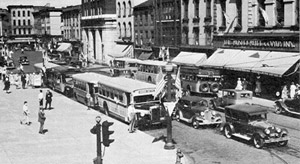 A number of buses in front of the Lycoming County Courthouse in June, 1933

After a thorough study, the management of Lehigh Securities decided that the Williamsport streetcar system was viable, though still weak. A major effort to rehabilitate and modernize the system was subsequently instituted. To set the stage for this effort, the four streetcar companies were consolidated in 1926 to form the Williamsport Railways Company, marking the first time the entire system was under one corporate title. Shortly thereafter, the company erected a new car barn at West Third and Park Streets (later the Administration Building of the Williamsport Area Community College), purchased five new cars, rehabilitated some of the older ones, and rebuilt much of the track.

When these improvements were completed, at a total cost of $245,700, Williamsport could claim to have one of the finest properties of its size in the entire electric railway industry. Although ridership increased for a brief period, this did not last long. As part of its efforts to save the system, the company increased fares in March 1927 to eight cents but this soon proved insufficient, and on August 1, 1930 fares were again raised – this time to ten cents. Still the company lost more than $26,000 that year. To make matters worse, the community, and therefore the company, was beginning to feel the effects of the Great Depression. A study of the trolley system was conducted; it showed the Vallamont line losing the most money and proposed that buses replace trolleys on this route. Six buses were subsequently ordered from the Twin Coach Corporation and placed in service on June 28, 1931. They were operated by the newly formed Williamsport Transportation Company, a subsidiary of the Williamsport Railways Company.

In 1932, wages of company employees were cut by ten percent in January and by another ten percent in October. But to no avail. In the last week of December 1932, the Company announced that it would suspend trolley service in March 1933 and bus service in July. Williamsport faced a lack of passenger service for the first time in 68 years.

As news of the trolley abandonment became known, no fewer than three promoters expressed interest in establishing a bus system in Williamsport. However, one of them, the Montour Auto Service Company, soon had to drop out because it was unable to raise the necessary capital. The remaining two were the White Transportation Company of Wilkes-Barre and Alvin R. Bush, a promoter from Olean, New York, who operated a bus system in that area.

Now, once again, there was intense competition over who was to control the transit system in Williamsport. While the state Public Service Commission reviewed the applications and held extensive hearings, both parties tried to influence the decision. Bush, financially backed by local residents John G. Snowden and Mrs. Mabel Koons, went ahead and purchased the Williamsport Transportation Company for $50,000 in cash. The White Company was unable to raise this amount in one lump sum. However, by promising to lower the fare from three tokens for 25 ¢ to four tokens for 25 ¢, White succeeded in getting Mayor Harris and the Williamsport City Council to pass a resolution supporting its bid for exclusive rights. Although Bush countered by vowing that his system would be locally owned and managed, the City Council remained loyal to White. Finally, on May 17, 1933, after four months of deliberation and hearings, the PSC ruled in favor of Bush giving him exclusive rights to provide bus service in the Williamsport area.

After adding five buses from his Olean operation to the existing fleet of buses, Bush announced on June 1, 1933 that he was ready to begin bus service and that trolley service would end in ten days. 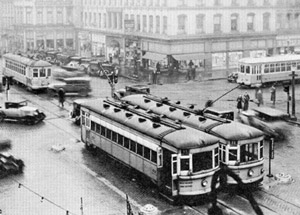 On the night of June 10, 1933, the trolleys were jam-packed with Williamsport residents who no doubt realized that it was the end of an era. At 1 a.m. on Sunday, June 11, the last trolley rolled to a halt. “The transportation pride of an earlier generation,” wrote a later historian of the era, “yielded to the age of speed and the familiar clatter of trolley wheels on steel rails was no more.”

It is interesting to note that Williamsport’s newer trolleys continued to operate in other systems for a number of years. Five of the newest ones were used in Allentown until 1953. Even more surprising, several of the trolleys bought around the time of World War I were used in San Francisco for a decade or more. As for the trolley tracks, a good many were removed during 1934 -35. Others were covered by repaving, although a section was still visible at the intersection of Walnut Street and Belmont Avenue until 1974.